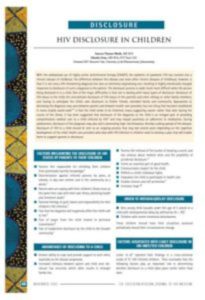 With the widespread use of highly active antiretroviral therapy (HAART), the epidemic of paediatric HIV has evolved into a chronic disease of childhood. The difference between this disease and most other chronic diseases of childhood, however, is that it is not only a life-threatening diagnosis but also an extremely stigmatising one, resulting in highly emotionally charged responses to disclosure of such a diagnosis to the patient. The disclosure process is made much more difficult when the person being disclosed to is a child.

One of the major difficulties is that one is dealing with many layers of disclosure: disclosure of HIV status to the child; the concomitant disclosure of HIV status of the parent/s and other siblings or other family members; and having to anticipate the child’s own disclosure to his/her friends, extended family and community. Approaches to disclosing the diagnosis may vary between parents and between health care providers, but one thing that has been established in many studies world-wide is that the child needs to be informed, many suggesting sooner rather than later during the
course of the illness. It has been suggested that disclosure of the diagnosis to the child is an integral part of providing comprehensive medical care to a child infected by HIV 5 and may impact positively on adherence to medication. During adolescence, disclosure of the diagnosis may also aid in preventing high-risk behaviour, thereby curbing spread of the disease.

Disclosure of HIV to a child should be seen as an ongoing process that may last several years depending on the cognitive development of the child. Health care providers who deal with HIV infection in children need to develop a plan that will enable them to support parents in disclosure.