The Children Left Behind: Barriers to testing and enrolling children in HIV care and treatment in Njombe region, TanzaniaPATA2020-09-25T09:16:55+02:00

The Children Left Behind: Barriers to testing and enrolling children in HIV care and treatment in Njombe region, Tanzania 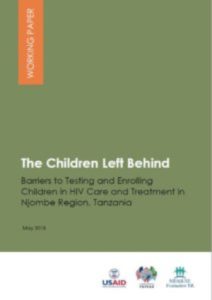 The HIV prevalence rate in Njombe region is the highest in Tanzania (14.8 percent). Despite this high prevalence, nearly 60 percent of HIV-exposed infants in the region did not receive an HIV test in 2013–2014.1 Subsequently, a much lower proportion of infants and children in the region have initiated antiretroviral therapy (ART), compared to adults. This is caused, in part, by barriers to testing HIV-exposed children. The purpose of this study was to explore the barriers to testing and enrolling infants and children with HIV in HIV/AIDS care and treatment programs and make recommendations for future research and interventions.