Blind spot: Reaching out to men and boys 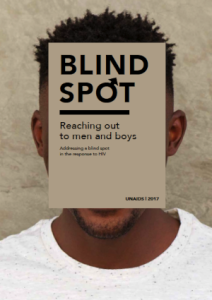 In a world of gender inequalities that disadvantage women and girls, publishing a report on how men are not being reached by health services and are not exercising their right to health may seem counterintuitive. It was indeed perplexing for me to learn that men were less likely than women to know their HIV status and less likely to access and adhere to HIV treatment. As a consequence, more men are likely to die of AIDS-related illnesses than women.

As the world strives to reach the high levels of HIV service coverage required to end AIDS as a public health threat, this blind spot in the response to HIV can no longer be ignored.

Women are still disproportionately more affected than men by HIV, and they continue to bear the brunt of the epidemic. A focus of the AIDS response in

recent years has rightly been on preventing HIV infections among women and girls, as well as expanding their access to treatment, thereby keeping them healthy and preventing the transmission of HIV during childbirth. Progress has been achieved, but it would be even greater if more men were reached by health and HIV service providers.

Men and boys are influenced by many gender norms that affect their health and discourage them from accessing health services. The concept of masculinity and the stereotypes associated with it create conditions that make having safer sex, taking an HIV test, accessing and adhering to treatment—or even having conversations about sexuality—a challenge for men. Unhealthy eating habits and the use of alcohol, tobacco and drugs further exacerbate the situation.

We must challenge the notion that the greater strength and independence that many men enjoy give them a licence to take more risks. At the same time, we also must counter the norms of masculinity that encourage homophobia and transphobia.

In many countries, policies that criminalize drug use or do not allow for harm reduction services make it difficult for people who use drugs to protect themselves. And health services are not friendly to young men.

Ending AIDS requires the engagement of everyone—men and women. Women are already on board. Now we need men to join in.