How linked are national HIV and SRHR strategies? A review of SRHR and HIV strategies in 60 countries 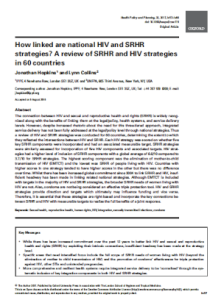 The connection between HIV and sexual and reproductive health and rights (SRHR) is widely recognised along with the benefits of linking them at the legal/policy, health systems, and service delivery levels. However, despite increased rhetoric about the need for this three-tiered approach, integrated service delivery has not been fully addressed at the legal/policy level through national strategies. Thus a review of HIV and SRHR strategies was conducted for 60 countries, determining the extent to which they reflected the intersections between HIV and SRHR.

Each HIV strategy was scored on whether five key SRHR components were incorporated and had an associated measurable target. SRHR strategies were similarly assessed for incorporation of five HIV components and associated targets. HIV strategies had a higher level of inclusion of SRHR components with a global average of 6.6/10 compared to 3.7/10 for SRHR strategies. The highest scoring component was the elimination of mother-to-child transmission of HIV (EMTCT) and the lowest was SRHR of people living with HIV. Countries with higher scores in one strategy tended to have higher scores in the other but there was no difference over time.Whilst there has been increased global commitment since 2004 to link SRHR and HIV, insufficient headway has been made in linking related national strategies. Although EMTCT is included with targets in the majority of HIV and SRHR strategies, the broader SRHR needs of women living with HIV are not. Also, condoms are not being considered an effective triple protection tool. HIV and SRHR strategies provide direction and targets which ultimately may influence funding and vice versa.

Therefore, it is essential that these strategies are right-based and incorporate the key connections between SRHR and HIV with measurable targets to realise the full benefits of a joint response.