Preventing and treating tuberculosis among children living with HIV 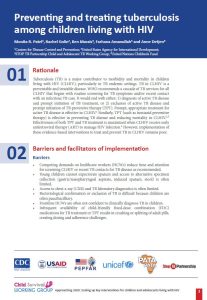 Similarly, TPT (such as isoniazid preventive therapy) is effective in preventing TB disease and reducing mortality in CLHIV. Effectiveness of both TPT and TB treatment is maximized when CLHIV receive early antiretroviral therapy (ART) to manage HIV infection. However, implementation of these evidence-based interventions to treat and prevent TB in CLHIV remains poor.”

READ THE FOREWORD
READ THE BRIEF