Strategies for identifying and linking HIV-infected infants, children, and adolescents to HIV care and treatmentPATA2020-09-30T15:48:54+02:00

Strategies for identifying and linking HIV-infected infants, children, and adolescents to HIV care and treatment 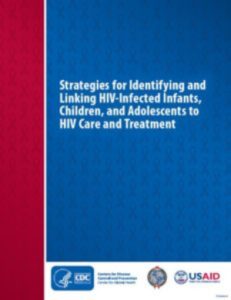 Identifying and diagnosing children as HIV-infected is the first step in the continuum of pediatric care and treatment. Yet despite the availability of live-saving treatment, many HIV-exposed infants and children are never offered an HIV diagnostic test.

Among reporting countries, only one-third of infants born to HIV-infected mothers received an HIV test in 2012, with some countries reporting infant testing rates below 10%. Children who do receive an HIV test are often tested later than recommended, even though earlier testing is needed in order to facilitate life-saving treatment initiation. Moreover, provider-initiated HIV testing on inpatient wards and in TB and malnutrition clinics to improve management of these children is frequently low but is critical to improve the management of children with these comorbidities. When testing at these sites is evaluated, the yield is high, illustrating the urgent need to expand case finding and treatment access to these children already in contact with healthcare services.

Beyond infancy, there are long-term survivors who remain unidentified as HIV-infected throughout childhood and into adolescence, often being missed during routine healthcare encounters. Improved case finding of HIV-infected infants, children, and adolescents through implementation of routine, systematic HIV testing and counseling (HTC) approaches in these settings is urgently needed to maximize pediatric treatment coverage and reduce rates of infant and child mortality attributable to HIV and AIDS.